Chapter 1
Punpun Onodera is the main character of Oyasumi Punpun. He belongs to a dysfunctional family, consisting of a suicidal mother and a violent, alcoholic father. Punpun's circumstances concerning his family shape and influence his actions later on in the story. Punpun often calls upon God with the chant, "Dear God, dear God, tinkle, tinkle, hoy!" which his uncle Yuuichi taught him.

The first chapter begins with Punpun's life at the age of 11 - the story progresses as Punpun grows up, with Punpun being in his early 20s at its conclusion.

Even though he is represented by the caricature of a cartoon bird, he is actually a human being.

Punpun is depicted as a caricature bird, but this depiction changes frequently throughout the story to express his state of mind. The other characters, unlike the audience, only see his human form, since the caricature birds he and his family are seen as are entirely figurative.

This is Punpun's default form. It's notable that in this form, he is wingless, despite the series' thematic song "Tsubasa wo Kudasai" wishing for wings and freedom. At the beginning of the story, his form is small and rounder, but as he grows older, his form elongates and sharpens. He usually appears with two beady eyes and a small beak, but the design of his face can change completely for certain emotions. When feeling bitter, he takes on squinted eyes and a hanging, puckered mouth. When drunk or cold, he appears with large, hairy nostrils and a gaping frown. His entire form turns black whenever feeling extremely depressed or angry. Although his limbs are usually thin, black lines, his hands sometimes take on a fleshed out, human form, though still pitch black.. 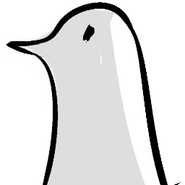 Punpun awakens as a tetrahedron in chapter 77.

It is said by Pegasus that the tetrahedron is the most stable of all polyhedrons and it is implied that Punpun himself is inside of the tetrahedron (as he is actually shown falling out of the tip of the polyhedron, rather than just reverting back to normal). Perhaps Punpun is using the strongest structure possible to keep his emotions bottled in and the trouble of others out. This may also imply that he is trying his hardest to hold himself together.

Punpun's arms are much more muscular and anatomically correct in this form. He might be drawn this way to show that he is just going through the motions of his life, and that his arms are all he feels like he uses.

The tetrahedron can disassemble into smaller parts to express his emotions. Smaller single tetrahedrons appear to dislodge from the main one to resemble Punpun's state, such as disappointment.

Despite having a bird-like appearance for most of the story, his appearance will occasionally shift to one having human-like features and even appear completely human, but his face will be covered and even his true name is not revealed to the audience. Members of his family also occasionally undergo similar changes.

Punpun as a child is particularly innocent and naive. He was quiet and timid when interacting with his friend and often complied with what his friends wanted. Punpun was kind, as described by his father. However, his kindness leads to him despising himself.

As an adult, Punpun is often seen to be sexually driven, depressed and cynical. After reuniting with Aiko, he finds sex very irresistible. Punpun also becomes highly aggressive and impatient, lashing out at Aiko and other people in violent ways. He becomes very apathetic to many things along with being highly suicidal. In contrast with his personality as a child, Punpun blames others much more than himself. Punpun is rarely fearful of anything and doesn't react to pain shown by when he let Aiko stab him in the eye and chest.

Punpun first had a crush on a violent girl from his class, Miyo. When she moved away, Aiko transferred into his class, and it was love at first sight to him.

After having a crush with a violent girl in his class that moved away, Aiko was a new student and introduced herself, then making Punpun claim his love at first sight for her through out the series. Their relationship starts off where Punpun is intimidated by Aiko, but as an adult, Aiko fears Punpun.

Sachi met Punpun when he and his friends went to an abandoned factory, then later on meeting him at the art exhibit on a date, then by "fate" at the snack/drinking bar wanting to say thanks for his story was a good one to read on her drawing notebook. Later on through out the series it seems that Sachi was Punpun's second love.

Papa Punpun is Punpun's father. He will usually talk about Punpun being a kind and smart kid along with him discussing about outer-space and baseball. After being arrested for domestic violence and having to divorce, Punpun is hurt from what was going on and the two never talk again. He will usually write letters and visited him once when Punpun was in his teenage-adults years. However, it is revealed that these letters were written by Punpun's mother in an effort to connect with her child. After Mama Punpun's funeral, Punpun claimed that he didn't hate Papa, it was just that his and Punpun's relationship changed a lot.

Mama Punpun is Punpun's mother. Mama Punpun and Punpun didn't get along well since Mama Punpun would yell or shout at him when mad or at the most random moments, which will make Punpun cry at times with his mom having to tell to "stop crying" or "Why are you crying?". But in the middle of the series, whenever Mama shouts/yells at Punpun, his reaction of crying does not show - showing how he got used to it through living with his mother. Days before her death, Mama Punpun told Punpun that she had loved him all this time, and that the fact she was sorry for the way she treated him throughout his childhood/teenage years, leaving Punpun and his mother crying.

Yuuichi Onodera is Punpun's uncle from his mother's side. Despite being different in age and relation, people often say that he and Punpun look alike (with Yuuichi without his glasses and hat/beanie). When Punpun's parents divorce, his sister in the hospital, and ex brother-in-law in jail, he acts like a second father figure to him, taking care of him in the best way he can with the absence of his parents in throughout most of the series. It should be noted that some of the actions of Yuuichi often parallel Punpun's choices especially in Punpun's adult life.

Community content is available under CC-BY-SA unless otherwise noted.
Advertisement