Aiko Tanaka is a very strange girl and the first love of Punpun. Her mother was part of a cult and later became injured, forcing Aiko to care for her. Although Aiko is absent for much of the manga, she plays a significant role in Punpun's emotional and psychological growth throughout.

Aiko has long medium-tone hair, straight bangs, and thick eyebrows. As a child, she is very expressive, but her smiles become a rare thing starting in middle school. She is terrible at faking a smile, and she has a trademark evil eye when displeased. She is conventionally attractive and works as a gravure model briefly when she's 19. Her wardrobe consists mostly of knitted sweaters, simple dresses, and boots. When her shoulders are bared in chapters 10 and 110, they are littered with bruises from her abusive mother. For the majority of the last three volumes, she has a black eye from her mother and a missing tooth after Punpun punches her. After her suicide, she appears to Punpun in a dream without the bruises or missing tooth.

In elementary school, Aiko is an outgoing and fearless child. She is not afraid to speak her mind and easily holds her own when playing with the boys. She has an affinity for escapism and pretending and intimidates Punpun with her often times extreme demands of their love. Her dreamy tendencies later make it easy for her to lie about having a glamorous life and clearly serve as a coping mechanism. In Nerima, she has few friends because of her family's cult involvement, but makes friends with the girls in class when she moves to Punpun's town. By the time she graduates elementary school, though, she has lost most of these friends due to her generally being "strange". After her initial falling out with Punpun and throughout middle school, she becomes notably more reserved and morose. In elementary school, she dreamed of being famous and adored by many people, but in middle school, she says it would be enough to be fully loved and understood by just one person. By the time she is a young adult, she has resigned herself to life with no friends, an abusive household, and hard labor. She admits that it has been hard for her to muster a smile for a long time, but Punpun, her enduring obsession, makes her smile.

After Punpun runs away from reading his essay in elementary school, Aiko overhears his friends talking about his dad being sent to jail for domestic abuse. In middle school, she confides in Punpun at the badminton tournament that she believes it is greedy for people with happy families to seek out romance. She says that her boyfriend has many things to hold dear besides her and would be fine if they broke up. She, on the other hand, would throw away all she has to be known fully by one person and says that surely Punpun must understand what she is saying. As adults, she tells him that she doesn't want children, since she's afraid she and Punpun would repeat the mistakes of their parents.

Aiko never quite makes up for the love she missed out on at home, and her desire to leave her broken, abusive family is a primary contributing factor to her escapist obsession with Punpun.

Aiko has no known siblings. She mentions that she can barely remember her birth mother, implying she left when Aiko was very young. Aiko remains with her father, who marries her step-mother some times before the series begins. In middle school, Punpun learns from Yaguchi that Aiko visits her ill father at the hospital after school. Her father eventually abandons them when Aiko is in the ninth grade. While working as a gravure model, Aiko uses her mother's maiden name, Orihara.

Mitsuko is Aiko's step-mother. In elementary, Aiko is mortified by her cult practices and plans their space cosmos water selling route to avoid the homes of her classmates, since her old classmates labeled her and her family as freaks. In later volumes, Mitsuko is shown to physically and verbally abuse Aiko, although bruises are visible on Aiko's shoulders as early as Chapter 10. Aiko lives alone with her step-mother after her father leaves them. Although separated, Mitsuko refuses to divorce and keeps the name Tanaka. After high school, Mitsuko injures her hip and supposedly becomes immobile, forcing Aiko work multiple harsh jobs to take on the responsibility as the sole bread-winner in the household. Mitsuko spends this money frivolously, on space cosmos water, Mr. Cosmos figurines, and vibrators. Aiko is obviously terrified of Mitsuko, shrinking into herself when they speak and only arguing back under her breath. She admits she doesn't mind being hit so long as it calms Mitsuko down for awhile. She is very obedient and even comes forth when told, for Mitsuko to hit her, despite Mitsuko being immobile and unable to walk towards Aiko herself. Mitsuko keeps her under her thumb by keeping a strict curfew and having Aiko report who she comes into contact with every day. She often repeats that Aiko is too incompetent and stupid to live on her own, without Mitsuko's guidance, making Aiko feel truly unable to leave. When Aiko and Punpun declare that they are going to live together, Mitsuko stabs her with a kitchen knife and is only stopped by Punpun bashing her head with a figurine. Soon after, he finds a crazed Aiko stabbing the dead body repeatedly. Later, Aiko claims that Mitsuko had woken up, so she stabbed her until she died, making Aiko, not Punpun, the murderer. There is also some implied rape, from Mitsuko to Aiko.

Mitsuko tends to mooch off her brother-in-law's money. He is the manager of an unspecified company in Tokyo, so when she throws out her hip and quits work, she pushes him to give Aiko a job in his factory working under harsh conditions for barely minimum wage. There is also some implied raped from her step-mother.

Aiko idolizes her uncle in Kagoshima, although she knows very little of him other than that he is a sane and wealthy doctor, and spends many years daydreaming about leaving her home to live with him. In elementary school, after Punpun discovers that Aiko's family is involved with the local cult, Aiko declares she will run away to Kagoshima. Punpun agrees to go with her, and Aiko packs her bags and waits for him to meet her at the end of semester, but Punpun never shows up, thus ending their short friendship. Two years later, as a middle school student, Punpun apologizes for that day, and Aiko again asks him to run away to Kagoshima with her, but he again refuses. When they re-enter each other's lives at age twenty and go on the run for murder, they travel to Kagoshima so Aiko can get her suspicious stab wounds treated by her uncle at Orihara Clinic, only to find that the small river town was completely abandoned years ago after a dam was constructed. 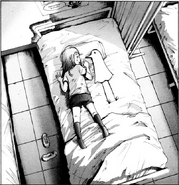 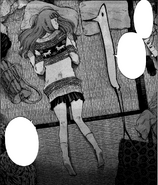 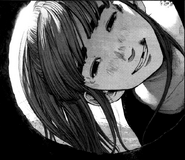 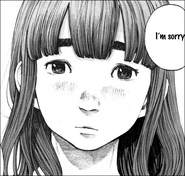 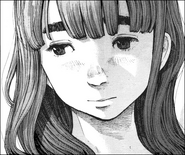 Add a photo to this gallery
Retrieved from "https://punpun.fandom.com/wiki/Aiko_Tanaka?oldid=5980"
Community content is available under CC-BY-SA unless otherwise noted.