Afro God is Punpun's personal God, whom is summoned by the chant Punpun's uncle taught him, "Dear God, dear God, tinkle tinkle hoy!" He is gradually revealed to be a manifestation of Punpun's darker thoughts, and Punpun later kills him by stabbing out his own eye. However, the day Punpun kills God, his cousin Soara is born with an identical God in his eye. God may be directly related to Pegasus' concept of the Dark Spot.

Many characters have their own personal Gods, such as Shimizu's God of Poop.

God is a perpetually smiling, photorealistic head. He has glasses, stubble, and bushy hair. He is usually a floating head of various sizes, peeking out of corners and crannies, but sometimes he appears with the body of a naked man. On rare occasions, his smiling expression changes, usually into a gaping frown.

God is sarcastic and never gives Punpun straightforward or helpful answers. He often mocks Punpun for being cowardly and continuing to live a dull life. His advice to Punpun becomes increasingly violent over the course of the story, often encouraging Punpun to injure and rape.

As a pottery teacher, Yuuichi meets and becomes infatuated with a sixteen-year-old girl named Yagi. She tells him that in times of loneliness, she prays to God by chanting, "Dear God, dear God, tinkle tinkle hoy." Minutes later, Yuuichi gets a call from Mama that Punpun has gone missing. In second grade, Punpun and his friend Watanabe went chasing after shooting stars, but Punpun became lost, and Watanabe was injured by a motorcycle. Punpun is crying when Yuuichi finds him, so Yuuichi teaches him the spell, "Dear God, dear God, tinkle tinkle hoy." Since Punpun becomes more depressed and withdrawn after this incident, he comes to use this spell often. He calls upon God whenever his parents are fighting or he has a question, but God never gives straight answers. When his parents divorce and he falls out with Aiko, Punpun vows to be a fearless adult, but God mocks him. God likes Punpun's cowardly side, though. In middle school, when Punpun becomes envious of Aiko's boyfriend, Yaguchi, God repeatedly tells him to kill him or stab him in the eye. Punpun later becomes frustrated with God's unhelpfulness, but God tells him that it's Punpun who decided to name him God. In high school, God appears on Punpun's date with Kanie, and when she rejects him, God persuades Punpun to try to rape her. Kanie slaps Punpun as soon as he kisses her, and, shocked by his actions, he forbids himself from masturbating for the next three years. Soon after this incident, God mocks Punpun for deciding against suicide. God is absent for much of the time when Punpun grows close to Sachi, but after their falling out, Punpun falls into a depression. Pegasus tries to recruit him but notes that he is a victim of the Dark Spot. As soon as Pegasus leaves, God appears and tells Punpun he has returned to his old self. Punpun's bird form becomes less stable following this, and he shifts through his semi-bird form, multi-eyed form, and eventually, his bull-horns form. After Pegasus begins to question whether the Dark Spot actually lives inside of everyone, Wada appears with small God's in the place of his eyes when he reveals his plan to betray Pegasus. Aiko comes to Punpun's door one day, covered in bruises, and God persuades him into raping her. Afterwards, she and Punpun decide to run away together. When they tell Aiko's step-mother, Mitsuko, that she is moving out, Mitsuko begins stabbing her. While Punpun cowers, God appears beside him. When Punpun realizes he must use physical force to stop Mitsuko, God states that he has been waiting a long time for this opportunity, and Punpun beats Mitsuko until she is supposedly dead. He and Aiko go on the run, and while freshening up in a public bathroom one day, Punpun looks into the mirror and sees God's face instead of his own. After Punpun tries to kill Aiko, the bandage falls off his eye to reveal a small God in its place. He muses to Aiko that at some point, he realized that whenever he prayed to God, he was actually just talking to himself. God appears in Punpun's injured left eye repeatedly after this. After their death, Pegasus and his followers, watching from Punpunia, usher in the birth of a new world, and God-shaped meteors fall through the sky. After Aiko hangs herself, Punpun travels to the abandoned Miso Factory on the day of this meteor shower and kills God by spearing a knife into his left eye. On this day, Yuuichi's son, Soara, is born, with a small God of his own in his left eye. Punpun lives a relatively quiet, peaceful life after the death of his God, but history is implied to repeat itself when, in the last chapter, two children in Harumi's class meet in a way that closely echoes Punpun and Aiko. 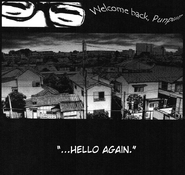 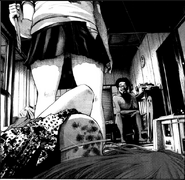 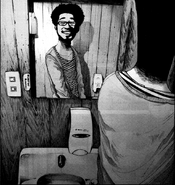 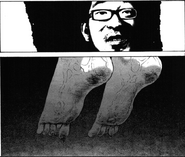 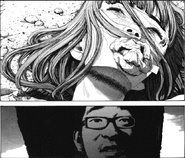 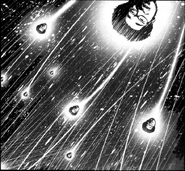 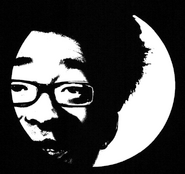 Add a photo to this gallery

God: WHAT DO YOU ASK OF GOD, PUNPUN?
Punpun asked God his question. "Is there any way for Mom and Dad to be nice to each other again?"
God: You know, pal, God's getting kind of tired of this topic. Anything else you want to ask?
(chapter 1)

God: Howdy-ho, Punpun. What's the word?
"Will Dad be back before the Japan Series?" Punpun asked.
God: We don't answer that kind of question at this company.
"Cheapskate!" Punpun fumed.
God: But we gladly accept all others!!
"Where's the thingy to grate apples?" Punpun blurted at random.
God: You should ask Uncle Yuuichi!
"Good idea!!"
(chapter 9)

God: Aren't you going to chase her? Well, that's okay. It's what God likes about you, Punpun.
(chapter 10)

With a "dear god dear god tinkle tinkle hoy", God would come to him. ...That stupid asshole.
(chapter 21)

Punpun: I wonder when it was that I realized talking with God was merely talking to my own self.
(chapter 132)

Retrieved from "https://punpun.fandom.com/wiki/Afro_God?oldid=5352"
Community content is available under CC-BY-SA unless otherwise noted.